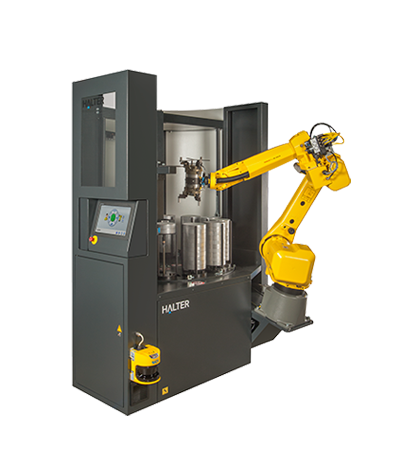 When it comes to machine tool peripherals, KNOLL Maschinenbau GmbH is well known as a leading manufacturer of conveying and filter systems as well as pumps.  The company is constantly growing. “Automation is a central topic for us, with which we not only want to increase our production efficiency, but also relieve our employees of monotonous activities. This leaves more time for more important activities when operating multiple machines,” says Johannes Lautenschläger, master Machining. Reason enough to also consider the automation of existing plants. In October 2018, a HALTER TurnStacker Premium was therefore commissioned on a universal lathe without counter spindle.

Decisive factors for this decision were the simple operation, the well thought-out workpiece storage in a very small space and the unproblematic handling of parts.

During the day shifts, where production is carried out in two-shift operation, the loading robot is permanently in use, whereby the operator in charge can, for example, change over or set up other machines during the processing of an order. In addition, the loading robot offers potential for ghost shifts for the production of less complex components. A special feature is that the automation solution can also be used to produce high-precision parts, e.g. bearing flanges, which have very narrow tolerances of between 10 and 20 pm with regard to bearing seats. A small conveyor belt with a measuring cup was mounted on the HALTER LoadAssistant especially for this purpose and the software of the loading robot was adapted. A finished bearing flange is not transported back into the buffer by the robot, but is placed on the belt and ejected from the system for quality inspection. Other products, such as cast sprockets, also leave the system in this way for further processing directly after machining. The advantages of the HALTER LoadAssistant as an equally simple and efficient automation solution are undisputed for Johannes Lautenschläger: “We will invest in further loading robots.”


Supplier of products for transporting, filtering and pumping contaminated liquids