"If only I had known sooner" - Thomas Böttcher

Does automation pay off for small and medium-sized companies in the machining sector? The answer is: 'Yes.' That is, at least as far as the experiences of Metallverarbeitung Thomas Böttcher are concerned.

Based in Leinefelde-Worbis, about 35 kilometers west of Nordhausen in Thuringia (Germany), the company was founded in 1995 as a one-man operation. Now with five employees, it is a classic producer of small series and individual parts. 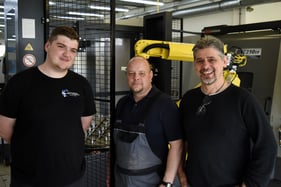 Most of the products are manufactured for the hydraulic sector and mainly consist of ready-to-assemble components, for example pumps for diverse application areas. In addition, the company makes prototypes for pre-production. Metallverarbeitung Thomas Böttcher's customers come from sectors such as medical technology, the construction industry and mining, to name just a few. "We basically cover the full range of machining work with our machines in a production area of ​​about 1200 square metres, i.e., turning, milling and grinding, whereby our production is characterized by very high precision. For example, we work with grinding tolerances of between 3 and 5 pm," explains Thomas Böttcher, managing director of the company.

Intuitive automation concept
About two years ago, the company invested in a loading robot from HALTER CNC Automation, more precisely in a HALTER LoadAssistant Universal Premium 25, for loading and unloading CNC lathes/milling machines. The compact solution covers the full range of workpieces up to 270 mm in diameter or length and was installed in a very short time as a plug-and-play system. The mobile robot cell can also be moved flexibly from one machine to another. 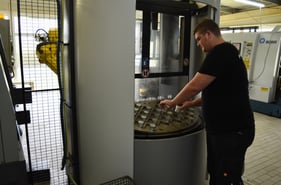 The LoadAssistant's parts buffer consists of workpiece-specific holders (grid plates and stacking stations) for rectangular and rotationally symmetrical parts and for bar material. “While the robot loads a machine with new workpieces and takes out finished parts at the front, an operator at the back can at any time take the finished parts from the buffer and supply the cell with new blanks."

Significantly less burden, with high process reliability
The reasons for investing in this automation solution are many, according to Böttcher. The robot cell should primarily reduce the burden on employees that results from monotonous activities such as loading and unloading the machines. In addition, the manager appreciates the high process reliability with constant, permanent reproducibility when inserting raw parts and removing finished parts. "When an employee in one shift has to load a machine with, for example, 100 parts for eight hours, at a certain point - understandably - their concentration drops, so that errors can creep in. With a loading robot, I completely rule out such problems in advance because it never gets tired despite working  continuously, and the CNC machine is continuously loaded with a constant precision and continuity.

Employees can therefore focus on more important tasks, such as quality control of finished parts or preparing new series."

The first experiences with the robot cell were so positive that, after just one year, Thomas Böttcher decided to invest in a second automation solution, another HALTER LoadAssistant Universal Premium 25.

Virtually unmanned production
The company's batch sizes range between 300, 500 and 1000 parts per order. The complete series are produced at one of the two turning/milling centres (machines of the Romi and Hyundai Wia type), which are connected to the loading systems of HALTER CNC Automation. The robot cells work almost unmanned during the day shift. "Depending on the component and the material to be processed, we have series of 50 to 100 pieces with cycle times of an average of seven minutes per part. At the moment, for example, we have a series of 1000 pieces." Taking out the finished parts manually and placing new blanks at the back of the cell can be done within minutes, according to Thomas Böttcher. At the end of the shift, the robot cells are also provided with extra workpieces, so that the machines can continue to produce unmanned for a few hours.

Fast ROI plus productivity increase
"When working with early and day shifts, according to the original calculations, our loading robots would pay for themselves within a year and a half. Our experience is, however, that the ROI is realized considerably faster. The purchase of the HALTER LoadAssistant was therefore worthwhile for us in any case, said Böttcher. He does not want to reveal how quickly the investments are actually recouped, but he does want to give an impression of the productivity increases that are possible with the automation solutions: "Before the arrival of the robot cells, we needed three machines for the production of a certain spectrum of parts. With the first HALTER LoadAssistant, we were able to produce the same spectrum of parts with just one machine. As a result, we were already able to increase production capacities with a single robot cell by freeing up two machines. In addition to increasing our productivity, the automation solutions have also positively increased delivery reliability. Thomas Böttcher received positive feedback across the board from his employees after the installation of the first robot cell: "They were enthusiastic about the automation from the start because they saw that the robot significantly reduced their burden."

Longer spindle runs: one of the keys
If Thomas Böttcher had to make a new decision based on his experience so far, only CNC machines in combination with automation would be eligible. However, he also emphasizes: "You cannot make a standard statement about this. For example, if a company invests in a CNC machine that mainly has to produce complex parts in small batches of five to ten pieces with very short machining times, automation is probably not an option. However, if a company achieves spindle times of 30 minutes or more when machining parts with the same number of pieces, the subject of automation becomes interesting again due to unmanned production over several hours."

Bridging a crucial gap
For Thomas Böttcher, the robot cells from HALTER CNC Automation are to a certain extent the 'missing link' that his company had sought for many years, without him really realizing it. "The automation solutions are the crucial connections between the orders we receive and the manpower at my disposal, partly due to the lack of skilled labourers. If I had known how well it works with the HALTER LoadAssistant, I would have had purchased the first loading robot many years ago."

So, who are FB Chain?

We are pleased to announce that with immediate...