Armbruster GmbH - Prepared for anything

Compact robotic systems are ideally suited for space-saving loading and unloading of CNC lathes and milling machines. The company Armbruster GmbH in the Black Forest in Germany shows how new potential can be tapped here in close cooperation with the company Halter CNC Automation.

The family business Armbruster, which is located in Steinach, some 20 kilometres south of Offenburg, in Germany, has about 130 employees and specializes in manufacturing complex, high-quality products and components for medical technology and industry. The range of services ranges from turning, milling, turn-milling and eroding to surface treatment and assembly. In an area of ​​2.500 square meters, the often-demanding materials, such as stainless steel, titanium, high-performance plastics and special materials, are processed in batch sizes from 1 to 1000 with modern machinery.

High degree of automation with exceptions
The company has been committed to a high level of automation for a long time. “The milling area is fully automated, the eroding installations only partly. In addition, in the turn-milling area, we have automated the machining of bars. Until now, the exception to this was the machines with workpiece claws, which we had to load and unload manually,” says Florian Schätzle, Team Leader Supervision Machining at Armbruster.

The company therefore decided to invest in a loading robot from Halter CNC Automation, more precisely a HALTER Universal Premium 35, which was coupled to one of its existing machines in the summer of 2021.

“On the Mazak Integrex i200 lathe milling centre, mainly various flange parts and longer rods made of stainless steel are machined. The blanks have diameters from 70 to 220 mm and heights from 30 to 70 mm, or lengths up to 450 mm for the bar material, explains Sebastian Ringwald, Team Leader Turning. 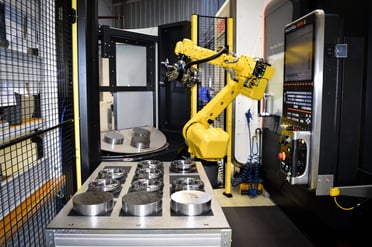 Compact solution for a wide range of parts
The HALTER Universal Premium 35 is ideal for such a spectrum, as the compact, versatile robot cell for CNC lathes/milling machines is designed for automated loading and unloading of rotationally symmetrical and rectangular workpieces, as well as long shafts. A wide variety of workpiece holders are available for this purpose, including so-called grid plates as part buffers with various capacities. While the robot equipped with a double gripper loads a machine at the front or removes a finished part, the system can be supplied with new blanks at the rear without interrupting the ongoing production.

Long automated production hours
“Of the sawn pieces with a diameter of up to 80 mm, we receive a maximum of 34 pieces on both sides of a grid plate, so a total of 68 workpieces. For blanks with a larger diameter of 250 mm, the capacity of the part buffer is sufficient for a total of 6 workpieces,” said Sebastian Ringwald. The processing times per workpiece for such parts are between 60 and 150 minutes, which means that sometimes longer automated production times are possible during regular shifts (production takes place in three-shift operation) without the need for an employee to be permanently at the machine. In principle, the company could have been satisfied with such results. But it wasn't.

More potential for longer loading times
Florian Schätzle says about this: “From the outset, we wanted to achieve high manufacturing flexibility with the robot and in this area, especially in terms of the capacity of the workpiece buffer; we saw a potential in the loading times that far exceeded the actual functionality of the system.”

The original plan was to create a parts buffer by means of a fixed-position table right next to the robot cell, on which the completed parts were to be placed. “But then we got the idea to also provide the machine with workpieces in this way,” says Florian Schätzle.

Armbruster produced the customized grid plates required for this. Halter CNC Automation carried out the adaptation of the robot programming for the special handling of the parts. “That was achieved in a short time and was no problem; they were always open to our proposals and implemented them in such a way that they were also practical to use,” says Sebastian Ringwald.

Unmanned production all weekend long
The loading of the Mazak Integrex i200 primarily takes place via the parts buffer on the table, on which the completed parts are also placed. When this buffer has been completely processed, if the corresponding number of pieces per production order is available, the robot turns to its internal grid plate and starts loading and unloading.

“With this strategy, we can flexibly increase the number of parts for processing that are in the automated process and thus significantly extend the loading times. One of the central goals is to make enough material available to the robot for the weekend that the machine can continue to work from Saturday afternoon until the start of the shift on Monday,” says Sebastian Ringwald.

More flexibility, even with short processing times
For example, the new solution made it possible to increase the number of workpieces for the larger flange parts with a diameter of more than 200 mm from 6 parts previously in the buffer of the robot cell to an additional 16 parts, so a total of 22 workpieces. This is noticeable even with the long shafts, from which several individual parts are manufactured. According to Florian Schätzle: “Although the shafts are currently only a small part of the production with the Mazak, despite the relatively short processing times here, we are also very flexible thanks to the table and we can achieve longer unmanned production times if necessary.”

Significant increase in productivity
The experiences so far with the automation solution have been positive, as Florian Schätzle confirms: “The employees have realized that the robot relieves them mainly because they can now organize their working hours better, for example for quality control of the finished parts, without having to be present at the Mazak every minute to avoid machine downtime. In addition, we generally plan production in such a way that the machines run throughout the weekend. This has always been a problem with machines with workpiece claws, and we have now solved that with the HALTER Universal Premium.”

Rewarding investment in targeted new planning
Before all that was achieved, however, some time had to be invested, as Sebastian Ringwald emphasizes: “We had to change our way of thinking to be able to produce the full spectrum of parts in a more process-oriented way, for example with regard to the long service life of tools or inserts that is absolutely necessary for long unmanned production. 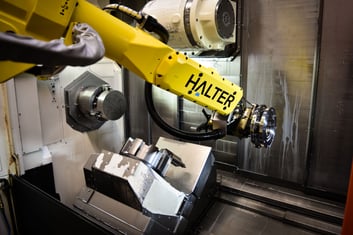 Chips  are of course always a subject in this context, which is why the claw and the workpieces are being cleaned automatically with a high-pressure cleaner after each operation in the machine. But these are just a few examples of what you absolutely need to think about when it comes to reliable, safe automation.”

The efforts have apparently paid off: “At the end we were still surprised at how well everything works. We are therefore very satisfied with the current results,” says Florian Schätzle.

Workshop Week and Open House in May